14 Films to Watch During "Noirvember" on Kanopy 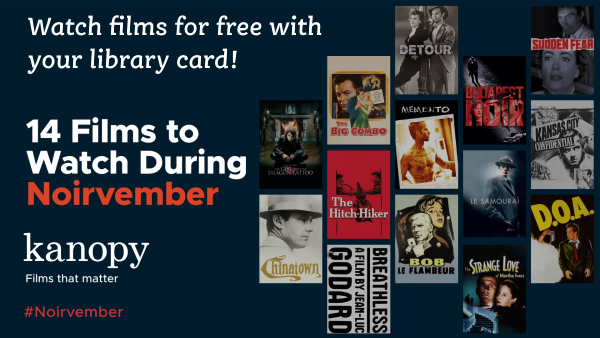 Kanopy presents Noirvember, a tribute to classic and contemporary film noir titles. Prevalent mostly in American crime dramas of the post-World War II era, Film Noir is a style of filmmaking characterized by such elements as cynical heroes, stark lighting effects, frequent use of flashbacks, intricate plots, and underlying existentialist philosophy. Stream these films (and more) for free with your Northbrook Library card.

The Big Combo
A noir classic about a police lieutenant who comes under pressure from a gang headed by a vicious thug. He is helped by the gangster’s wife, jealous of her husband’s affair with another woman, who supplies him with information to help him close the net on his foe.
kanopy.com/video/big-combo-0

D.O.A.
Frank Bigelow (Edmond O’Brien) is about to die, and he knows it. The accountant has been poisoned and has only 24 hours before the lethal concoction kills him. Determined to find out who his murderer is, Frank, with the help of his assistant and girlfriend, Paula (Pamela Britton), begins to trace back over his last steps. As he frantically tries to unravel the mystery behind his own impending demise, his sleuthing leads him to a group of crooked businessmen and another murder. Chosen for preservation by the National Film Preservation Board, USA.
kanopy.com/video/doa

Chinatown
A landmark movie in the film-noir tradition, Chinatown stands as a true screen classic. Jack Nicholson is private eye Jake Gittes, living off the murky moral climate of sunbaked, pre-war Southern California. Hired by a beautiful socialite (Faye Dunaway) to investigate her husband’s extra-marital affair, Gittes is swept into a maelstrom of double dealings and deadly deceits, uncovering a web of personal and political scandals that come crashing together. Winner of the Best Original Screenplay Award at the Academy Awards. Winner of the Best Director, Best Actor, and Best Screenplay Awards at the Golden Globes and the BAFTA Awards.
kanopy.com/video/chinatown-1

Breathless
There was before Breathless, and there was after Breathless. Jean-Luc Godard burst onto the film scene in 1960 with this jazzy, free-form, and sexy homage to the American film genres that inspired him as a writer for Cahiers du cinema. With its lack of polish, surplus of attitude, anything-goes crime narrative, and effervescent young stars Jean-Paul Belmondo and Jean Seberg, Breathless helped launch the French New Wave and ensured that cinema would never be the same.
kanopy.com/video/breathless

The Hitch-Hiker
Beyond its obvious cultural significance as the only classic film noir directed by a woman (actress Ida Lupino), The Hitch-Hiker is perhaps better remembered as simply one of the most nightmarish motion pictures of the 1950s. Inspired by the true-life murder spree of Billy Cook, The Hitch-Hiker is the tension-laden saga of two men on a camping trip (Edmond O’Brien and Frank Lovejoy) who are held captive by a homicidal drifter (William Talman). He forces them, at gunpoint, to embark on a grim joyride across the Mexican desert.
kanopy.com/video/hitch-hiker-0

Detour
From Poverty Row came a movie that, perhaps more than any other, epitomizes the dark fatalism at the heart of film noir. As he hitchhikes his way from New York to Los Angeles, a down-on-his-luck nightclub pianist finds himself with a dead body on his hands and nowhere to run–a waking nightmare that goes from bad to worse when he picks up the most vicious femme fatale in cinema history, Ann Savage’s snarling, monstrously conniving drifter Vera. Working with no-name stars on a bargain-basement budget, B auteur Edgar G. Ulmer turned threadbare production values and seedy, low-rent atmosphere into indelible pulp poetry.
kanopy.com/video/detour-0

Kansas City Confidential
In this noir-thriller, three convicts are contracted by a mysterious benefactor to pull a bank heist. The four men, having worn masks during the crime, are complete strangers and are anonymous to one another, but plan to meet up in Mexico to divvy up the loot. Part of their master plan is to frame the robbery on Joe Rolfe, an ex-con himself--but little do they know, Rolfe has convinced the police of his innocence and has now been hired to catch the true culprits.
kanopy.com/video/kansas-city-confidential

Budapest Noir
Budapest, 1936. The Hungarian prime minister returns from Germany in a coffin, his dream of making Hungary into a fascist state snuffed out--for now. Crime reporter Zsigmond Gordon has other things on his mind. A cynic who thinks he has seen it all, a tip leads him to an unusual crime scene in a seedy part of the city - a beautiful, well-dressed young woman is dead, with only a Jewish prayer book in her purse...Investigating the mystery girl’s murder, Gordon enters a world of pornographers, brothels and Communist cells leading to the highest echelons of power. Official Selection at the Boston Jewish Film Festival.
kanopy.com/video/budapest-noir

Memento
Three-time Oscar nominee Christopher Nolan (Interstellar, Inception) directs this critically acclaimed mystery. Leonard (Guy Pearce) is tracking down the man who raped and murdered his wife. The difficulty, however, of locating his wife’s killer is compounded by the fact that he suffers from a rare, untreatable form of memory loss. Although he can recall details of life before his accident, Leonard cannot remember what happened fifteen minutes ago, where he’s going, or why. Nominated for Best Original Screenplay and Best Editing at the Academy Awards. Nominated for Best Screenplay - Motion Picture at the Golden Globes. Nominated for Grand Jury Prize - Dramatic at the Sundance Film Festival.
kanopy.com/video/memento-1

Bob the Gambler
Bob has decided to give up his business in order to enjoy his hobby: gambling. However, he cannot refuse one last job proposed by a friend: to take part in an amazing raid on the Deauville casino. But that day, upon seeing the gaming rooms, a gambling table threatens to divert his attention away from the well-planned hold-up.
kanopy.com/video/bob-gambler

Kansas City Confidential
In this noir-thriller, three convicts are contracted by a mysterious benefactor to pull a bank heist. The four men, having worn masks during the crime, are complete strangers and are anonymous to one another, but plan to meet up in Mexico to divvy up the loot. Part of their master plan is to frame the robbery on Joe Rolfe, an ex-con himself--but little do they know, Rolfe has convinced the police of his innocence and has now been hired to catch the true culprits.
kanopy.com/video/kansas-city-confidential

Sudden Fear
In this rediscovered masterpiece of film noir, Joan Crawford plays a successful playwright who marries a mediocre actor (Jack Palance). She soon discovers that he not only married her for money but that he plans to murder her with the help of his lover (Gloria Grahame). Sudden Fear received Academy Award Nominations in 1952 for Charles Lang Jr (Best Black & White Cinematography), Joan Crawford (Best Actress), and Jack Palance (Best Supporting Actor). 2013 Official Selection Il Cinema Ritrovato
kanopy.com/video/sudden-fear

The Strange Love of Martha Ivers
Although this was director Lewis Milestone’s only venture into the realm of noir, it remains a classic of the genre. The Strange Love of Martha Ivers stars Barbara Stanwyck as the title character, a tough, spoiled, willful heiress married to the local D.A., Walter O’Neil (Kirk Douglas), a weak-willed alcoholic. When old friend Sam Masterson (Van Heflin) suddenly returns to town after many years away, he approaches Walter to ask his help with the case of Toni Marashek (Lisabeth Scott), a friend who has been falsely accused of a crime. Every element seems perfectly in place in this typically guilt-saturated noir, with superb direction from Milestone, a memorable score by Miklos Rosza, and an outstanding performance by Kirk Douglas in his film debut.
kanopy.com/video/strange-love-martha-ivers-0

The Girl with the Dragon Tattoo
Forty years ago, Harriet Vanger disappeared from a family gathering on the island owned and inhabited by the powerful Vanger clan. Her body was never found, yet her beloved uncle is convinced it was murder and that the killer is a member of his own tightly knit but dysfunctional family. He employs disgraced financial journalist Mikael Blomkvist (Michael Nyqvist) and the tattooed and troubled but resourceful computer hacker Lisbeth Salander (Noomi Rapace) to investigate. When the pair link Harriet’s disappearance to a number of grotesque murders from almost forty years ago, they begin to unravel a dark and appalling family history. But the Vangers are a secretive clan, and Blomkvist and Salander are about to find out just how far they are prepared to go to protect themselves. Winner of a BAFTA Award for Best Film not in the English Language.
kanopy.com/video/girl-dragon-tattoo-0