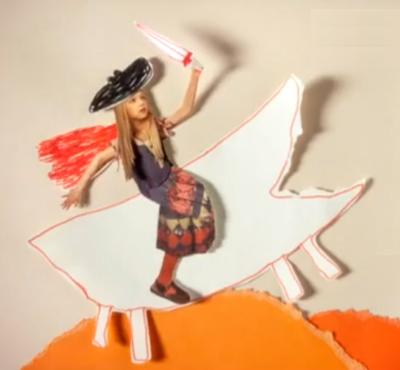 After the votes were tallied, the film Imagination (Ukraine) was awarded the coveted "Best of the Fest" at the International Children's Film Festival held at the Northbrook Public Library on Saturday, October 26. This innovative film, directed by Catheryne Chepik, blended live action and animation, taking the viewer on an adventure through the offbeat worlds of a creative young girl.

According to one voter, "Imagination was the best because it showed how many worlds you could visit with just imagination."

The films Real Strength (Denmark) and Best Sound in the World (Brazil) received the second highest number of votes.

Before casting their votes, the children and families who attended the Film Festival in the library's Auditorium were treated to 11 short films from 10 countries—Brazil, Denmark, Canada, France, Netherlands, UK, Hungary, Ukraine, Germany, and Australia—celebrating the magic of life around the globe.

The Film Festival not only provides quality entertainment to young audiences, it offers them global perspectives and teaches them to develop healthy screening habits, according to Nicole Dreiske, curator and author of The Upside of Digital Devices: How to Make Your Child More Screen Smart, Literate, and Emotionally Intelligent.

This annual event is cosponsored by the Friends of the Library. Special thanks to Howard Conant and the MacArthur Foundation, the Academy of Motion Picture Arts and Sciences, the Conant Family Foundation, the Driehaus Foundation, and the International Children's Media Center.