Today's Hours: 9am - 9pm
Home › Keep in Touch › Library News › Learn what goes on behind the scenes to provide you a first-class movie going experience in the Auditorium 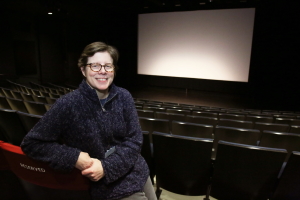 Each year, we screen approximately 60 films in the Auditorium. Some of the most highly anticipated—and widely attended—screenings take place during our annual Critics’ Choice series, which features Oscar-nominated films.

But securing the licensing for these films can be challenging, says librarian Margo Hill, who works with movie studios and distributors to acquire the rights to show the films.

To meet the March deadline, she has to start requesting films months ahead of time. Her “ears perk up around October” when film critic circles begin to buzz about upcoming noteworthy films.

“It’s tricky because some studios wait to release their best work toward the end of the year, so I just cross my fingers,” said Margo, who worked in film production before becoming a librarian. “So far I’ve found the distributors we work with to be incredibly helpful.”

The library has the fortune of having a 225-seat auditorium and the proper commercial-grade system to show a wide array of films to the public.

“It’s nice when patrons walk in and say, ‘Oh, wow! That’s not what I expected from a library,’” she said. After Margo acquires the films, there’s still more work to do to.

That’s where Auditorium Coordinator, Arielle Valene comes in. Once the film hard drive arrives, she ingests it into the Auditorium’s industry-standard server and runs tests.

“Each movie has to be individually fitted to make sure the image is correctly justified,” she said. Even if it’s off by just a centimeter, she makes all the necessary adjustments to make the film fit perfectly.

Arielle also provides smooth transitions, such as turning down the lights and releasing “coming soon” slides before the film begins, all of which help to provide an enriching patron experience.

On the day of a film screening, Security Monitor, Syed Jaffery, plays an important role in ensuring attendees have a safe and pleasant experience.

In addition to handling emergency situations, Syed provides special assistance for attendees using wheelchairs, walkers, and strollers. At large auditorium events, he expects to assist at least 10 to 20 patrons.

“The main thing I’ve learned is that a big part my job, besides handling incidents and accidents, and assisting emergency crews, is customer service,” he said.