Today's Hours: 9am - 9pm
Home › Keep in Touch › Library News › Bringing Smiles to the Community with "One Million Bubbles of Joy"

Bringing Smiles to the Community with "One Million Bubbles of Joy" 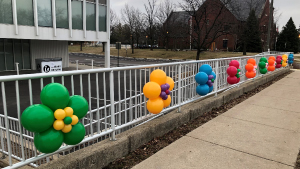 When Barbara Levinson reached out to the library for permission yesterday to install a “joyful” balloon display on the library’s fence along Cedar Lane, Executive Director Kate Hall loved the idea.

Barbara filled me in on how the idea came about early this morning as she was putting the finishing touches on the display, which provide a colorful pop of color against the white fence and overcast skies.

“The balloon community wanted to do something special to spread a little joy during these times by sharing their art, so they planned a worldwide event on March 26 called “One Million Bubbles of Joy.”

They reached out to balloon designers around the globe, including Northbrook business owner Barbara of Barbara’s Balloons, who immediately decided to get involved.

“I wanted to bring a smile to all of the people walking and driving by, including the people in the community we are so thankful for, like our police officers, firefighters, and sanitation workers.”

It's a welcome return to the smiles usually associated with visiting the library, which temporarily closed its doors to the public on March 13.

As I was talking to Barbara and taking some photos, a car slowed down and the driver yelled out with a big smile, “It looks terrific!”

Barbara smiled and then packed up her truck to head over to Sunset Foods for her second balloon installation of the day.

You can find Barbara’s balloon installations in front of the entrance to the library parking lot at 1220 Cedar Lane and in front of Sunset Foods, 1127 Church Street.

You can also visit www.onemillionbubbles.org to see a map showing where all of the balloon installations are taking place, including Northbrook, IL, or use hashtag #onemillionbubbles to find photos on social media.