Today's Hours: 9am - 9pm
Home › Keep in Touch › Library News › Debut Author Christina Li Credits the Library as a Key to Her Success 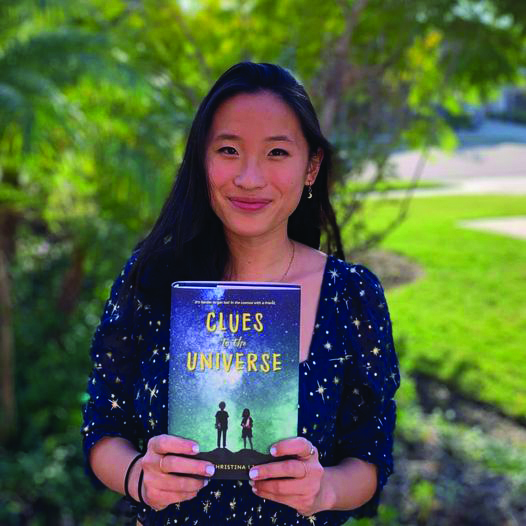 Northbrook Public Library was one of the first places author Christina Li gravitated toward when her family moved here from Michigan.

“I went to the library all the time whenever I could,” said Christina. “It was a mile from my house and I’d go there to study. Lots of people from high school went there to congregate. It’s such a beautiful building.”

“I had never encountered such a large children's collection before,” Christina said from a video chat interview recently. “There was this fantastic wall of YA books. And chances were if a book had just come out, the library would have it. That was definitely really helpful when I was developing my skills as a writer and reader.”

She credited the library in the acknowledgment section of her new book, Clues to the Universe, writing “Libraries and librarians make the world go round. To the Northbrook Public Library, for always having such an amazing collection of books.”

Since its release in January, Clues to the Universe has been winning praise from reviewers and young adult authors. Published by Quill Tree Books, a HarperCollins imprint, the middle grade novel tells the story of an unlikely friendship between two 12-year-olds who are navigating grief and loss in their own ways.

Like Christina, the story’s protagonist, Ro, is Chinese American. Growing up, Christina said she didn’t see a lot of Asian American representation in children’s books until she learned about authors like Linda Sue Park and Grace Lin.

“Their books really changed my life,” she said. “I’m really glad people these days are embracing more and more books by authors with diverse viewpoints and books written by marginalized authors.”

She is currently under contract to write another middle grade contemporary fiction novel, tentatively set to be published in 2023.

Christina, a senior at Stanford University, had finished writing four other novels before Clues to the Universe, her first published novel.

The whole journey of getting published started in the summer of 2017, when she began thinking about the story. While attending her classes, she’d write in bursts and outline plot lines. “Then when it was summer it was go time. I would work on drafting and revising everything,” she said.

Christina attended Shabonee Elementary School, Wood Oaks Junior High, and Glenbrook North High School. At age 18, she moved to San Diego with her family. Her memories of living in Northbrook are intricately tied to spending a lot of time at the library, and she is thrilled to know the same library she treasured in her youth will be stocking up on copies of her work.

“It really feels like it’s come full circle. I owe a lot of my success to the Northbrook Public Library.”

You can learn more about author Christina Li at her website, www.christinaliwrites.com.

Find Clues to the Universe in our YS department (JUV FICTION Li, C.).