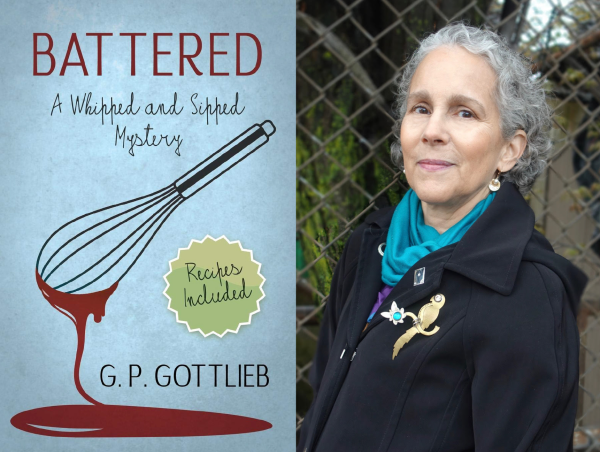 Galit Gottlieb's “culinary mystery” Battered: A Whipped and Sipped Mystery is part of the library's Local Collection, a space on the second floor next to the Reference desk. Created by local writers and artists, the materials in this collection include novels, nonfiction, short stories, music, scores, and films for patrons to browse and check out.

Where did you get the idea to write this book (or books)?

I’d always dreamed about writing a book and had started—but never finished—several over the years. Then, in 2014, a month after my last Glenbrook North graduate went off to college, I was diagnosed with an aggressive form of breast cancer. I had to quit my job as assistant director of a law center (DePaul University College of Law) because of the ravages of chemotherapy. During that year’s battle, I read quite a lot of cozy mysteries. My brain wasn’t working that well, but I was still able to solve those murders! And I vowed to myself that when I had my strength back, I would finally finish a book, a mystery of some kind, and get it published.

How long did it take you to complete the work and what was that process like?

It took me a little over two years of writing, working with an editor who made me re-write and then re-write again. When the manuscript was finally ready, I started submitting query letters to literary agents and received a whole lot of rejections. Then I submitted the first chapter to an online contest listed in Poets and Writers magazine. I won! The prize was a publication contract and Battered: A Whipped and Sipped Mystery came out in August.

How has being a part of the Northbrook community affected your work?

We moved to Northbrook to be close to both my parents and my sister, who already lived here. Northbrook was a lovely place to raise our children. Although sometimes I wrote sitting at the kitchen table looking out over our beautiful Charlemagne yard, I used to meet two friends at the Northbrook Public Library at least once a week. We’d sit on the second floor at one of the tables by the window and write for several hours. During that year of recovery, I would go more often because it was quiet, except before exams, and not as isolated as sitting at home all day. Since this book was born on the library’s second floor, I’m happy it’ll now be available to readers there!

What would you want to share with someone who is reading your book (or books)?

Battered: A Whipped and Sipped Mystery is a ‘culinary mystery,’ set in a fictional Chicago café, in which someone dies, but everyone else is always eating, and the recipes for some of my own healthful, tasty dishes are in the back of the book. The second book in the series, Smothered: A Whipped and Sipped Mystery, is coming out next summer. I’d also want to warn readers that I’ve asked everyone I know if they guessed how the book would end – no one has been able to figure it out yet!

*Galit says she’d be happy to hear from those who’ve read her work. You can reach her through her website, gpgottlieb.com.