The following events are made possible by Illinois Libraries Present, a statewide collaboration between public libraries, including Northbrook Public Library, which offers high-quality events for member libraries of all sizes and budgets. To request accommodations, email illinoislibrariespresent@gmail.com.

Saying Yes to Your Story: A Conversation with Kwame Alexander

Wednesday, February 8 at 7:00pm (Note: this program will not be recorded)

Join us for an evening of inspiration and conversation with best-selling and award-winning children’s and young adult author and poet, Kwame Alexander, author of the Newbery Award-winning book, The Crossover, Newbery Honor/Caldecott Medal-winning book, The Undefeated, and most recently, An American Story, for an Illinois Libraries Present event for young people and their families.

Kwame will share ways to say yes to your story and persist in the face of rejection as he shares his own publishing journey. As a creator of more than 36 books, Kwame will energize our community to harness the power of words and storytelling for change.

Experience an entertaining and hilarious evening with New York Times best-selling science author, Mary Roach Roach will discuss her frank approach to science, the importance of humor, and explore the weird, wonderful world in which we live. Dubbed “America’s funniest science writer” by the Washington Post, Roach has explored topics from the curious lives of human cadavers, packing to visit space, the afterlife, the alimentary canal, and more.

Annalee Newitz will join Mary Roach in conversation. Newitz has a Ph.D. in English and American Studies from UC Berkeley and is one-half of the hilarious podcast, "Our Opinions are Correct." On their show, Newitz delves into the weird, wonderful, and nerdy framework of science in pop culture.

We kicked off the new year with a conversation about joy with best-selling essayist and award-winning poet Ross Gay.

Shauna Sever, cookbook author, TV and radio contributor, and daughter of the great Midwest, shared her love of food, baking, and some tips to make your holiday gatherings delicious.

A conversation with Caitlin Doughty, mortician, bestselling author, and advocate for death acceptance, who discussed the reform of Western funeral industry practices and much more with Mark Bazer (The Interview Show).

A Conversation with Marlee Matlin: From Oscar to West Wing and Beyond (9/14/22)

In celebration of Deaf Awareness Month, Marlee Matlin shared the highs and lows of her Hollywood career and journeys as a Deaf rights activist. The youngest recipient of the Best Actress Oscar, Matlin’s acting career recently achieved another milestone as her 2021 film CODA swept every category it was nominated in at the 2022 Academy Awards. This program was offered in ASL and translated through an interpreter.

Musician and author Michelle Zauner discussed her music career and her beloved bestselling memoir, Crying in H Mart with Chicago-based author and music critic, Jessica Hopper. Michelle Zauner is best known as a singer and guitarist who creates dreamy, shoegaze-inspired indie pop under the name Japanese Breakfast. She has won acclaim from major music outlets around the world for releases like Psychopomp (2016) and Soft Sounds From Another Planet (2017). Critically acclaimed Jubilee (2021) is currently nominated for two Grammy awards. Crying in H Mart is her first book.

Chef Kwame Onwuachi discussed his first cookbook, My America: Recipes from a Young Black Chef with Erick Williams. the owner and executive chef of Chicago's Virtue restaurant. Kwame Onwuachi is a James Beard Award-winning chef who was born on Long Island and raised in New York City, Nigeria, and Louisiana. Onwuachi was first exposed to cooking by his mother, in the family’s modest Bronx apartment, and he took that spark of passion and turned it into a career. He trained at the Culinary Institute of America and opened five restaurants before turning thirty. A former "Top Chef" contestant, he has been named "Food & Wine's" Best New Chef 2019 and a 30 Under 30 honoree by both "Zagat" and "Forbes." Onwuachi’s 2019 memoir, Notes from a Young Black Chef received critical acclaim.

Jessamine Chan and Emily Maloney discussed the systems of power that impact our lives, our families, and our finances, through the lens of their acclaimed books, The School for Good Mothers and Cost of Living. Jessamine Chan is the New York Times bestselling author of The School for Good Mothers, her debut novel. Her short stories have appeared in Tin House and Epoch. She holds an MFA from Columbia University and lives in Chicago with her family. Emily Maloney is the author of Cost of Living, a collection of essays. Her work has appeared in Glamour, Virginia Quarterly Review, and Best American Essays, among others. She holds an MFA from The University of Pittsburgh and lives in Evanston, Illinois, with her partner and their dog.

Actor, humorist, and woodworker, Nick Offerman discussed his newest book, Where the Deer and the Antelope Play: The Pastoral Observations of One Ignorant American Who Loves to Walk Outside. His walking companion, Jeff Tweedy of Wilco, will join him in conversation. Jeff Tweedy is an American musician, songwriter, author, and record producer best known as the singer and guitarist of the band Wilco. Originally from Belleville, IL, Tweedy has released 20 studio albums across his career. He is the author of two books, Let's Go (So We Can Get Back): A Memoir of Recording and Discording with Wilco, Etc. and How to Write One Song: Loving the Things We Create and How They Love Us Back.

Award-winning humorist Jenny Lawson discussed her most recent bestseller, Broken (in the best possible way), and her brilliantly funny body of work. Jenny is an American journalist, author, and blogger known for her great candor in sharing her struggle with mental illness. “The Bloggess” lives in Texas with her husband and daughter and was constantly “buying too many books” (“Not a real thing,” she insists), so she decided to skip the middleman and just started her own bookshop, which also serves booze because books and booze are what magic is made of. She has previously written Let’s Pretend This Never Happened and Furiously Happy, both of which were #1 New York Times bestsellers. Joining Jenny in conversation will be R. Eric Thomas, a national bestselling author, playwright, and screenwriter. Off the page, Eric is also the long-running host of The Moth StorySLAMS in Philadelphia, and often appears on The Moth Radio Hour, NPR's All Things Considered and It's Been A Minute with Sam Sanders.

One of romance's brightest new voices, bestselling author Jasmine Guillory, discussed her latest novel, While We Were Dating, and the modern rom-com. Author Morgan Rogers (Honey Girl) will join her in conversation. Jasmine Guillory is a writer, lawyer, and New York Times bestselling author of six romance novels, including The Wedding Date, The Proposal, and While We Were Dating. NPR called The Proposal, “Rollicking, charming, and infinitely zesty.” Her work has appeared in O, The Oprah Magazine, Cosmopolitan, Bon Appetit, and Time. She lives in Oakland, California where she has towering stacks of books in her living room, a cake recipe for every occasion, and upwards of 50 lipsticks. 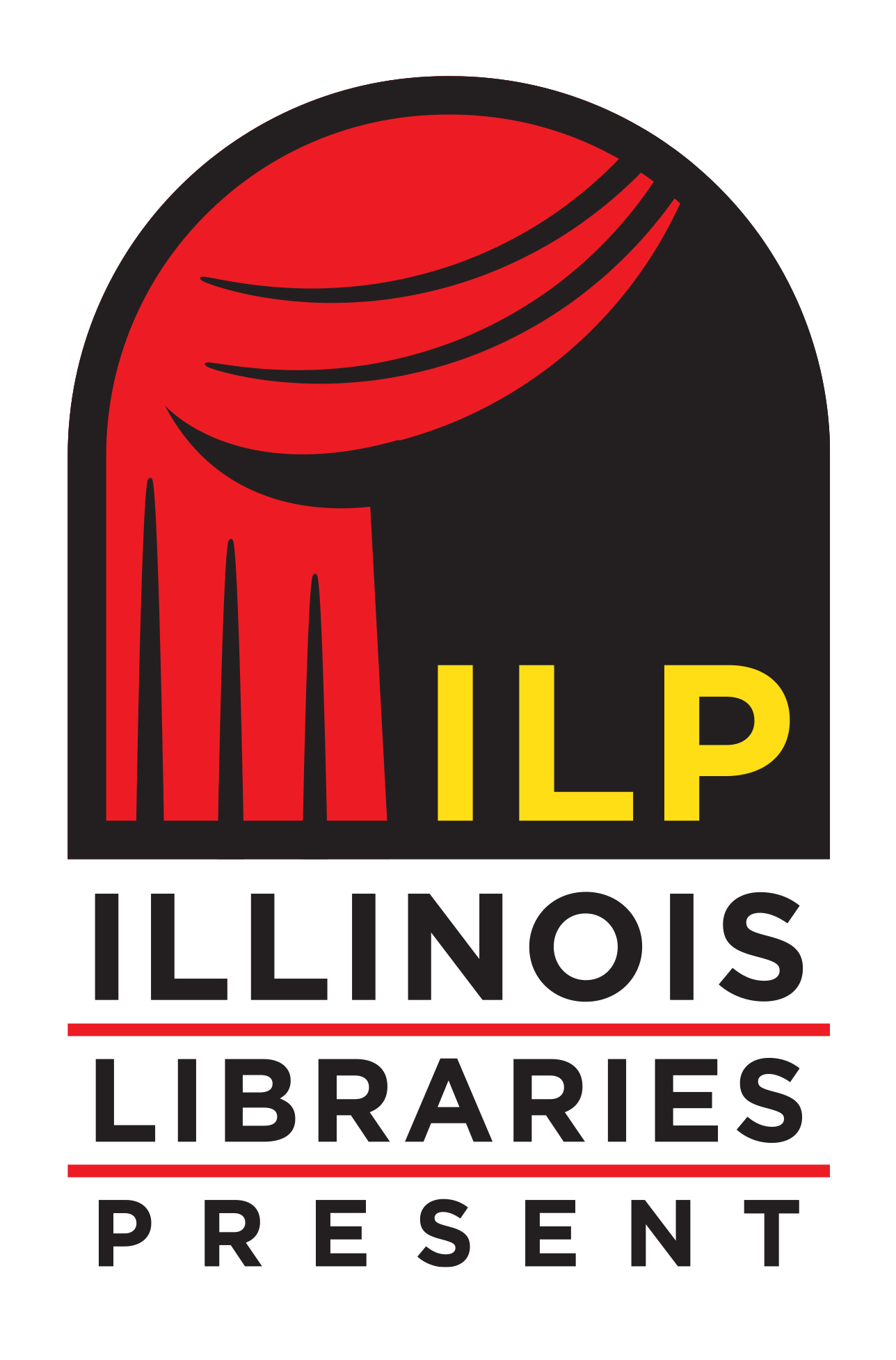 Illinois Libraries Present is a statewide collaboration among public libraries offering high-quality events. Illinois Libraries Present is funded in part by a grant awarded by the Illinois State Library, a Department of the Office of Secretary of State, using funds provided by the U.S. Institute of Museum and Library Services, under the provisions of the Library Services and Technology Act (LSTA).

Illinois Libraries Present consists of over 200 public libraries across the state who have joined together to provide high-quality online events at equitable prices for member libraries of all sizes and budgets. It connects communities and audiences across the state through shared event experiences. We're proud to be involved with such a great collaboration. Our Executive Director, Kate Hall chairs the Steering Committee, and our Auditorium Coordinator, Arielle Raybuck chairs the Event Production Committee.

The group also is committed to inclusion and accessibility. To request accommodations, email illinoislibrariespresent@gmail.com.