This film festival returns to the Auditorium, showcasing short children's films from around the world on Saturday, November 5 from 2:00-3:30pm. Watch the Official Trailer (43 sec.)

Register for the Film Fest

Join us in the Auditorium to watch these award-winning international short films for kids ages 5-10 with an adult caregiver. After watching the films, attendees are invited to vote for their favorite to win "Best of Fest," and are invited to stay for a virtual Q&A with some of the film's directors from around the world! Although the films will appeal to children ages 5-10, even older kids will find something to love.

The whimsical short films accentuate the value of ingenuity and flights of fancy. A young girl finds that music is the perfect outlet for her energy in Kenya’s Symphony (USA), a special toy creates a bond between father and son in Mall (Germany), and an unconventional dancer reveals his skills in Caught Off Guard (Singapore).

Co-hosted by the Chicago-based International Children’s Media Center (ICMC), the festival will teach children how to watch a movie "with their minds awake" and then vote for their favorite film. After the screening, attendees are invited to stay for a virtual Q&A with film directors from around the world.

USA, 2019, 5 min. Directed by Carlos Douglas Jr. A rowdy, playful young girl discovers a passion for music after her mother takes her to hear to a symphony. Non-Verbal.

UK, 2020, 3 min. Directed by Bethany Powell. The animals of the savannah are afraid of strong, husky Rhino. But after seeing Rhino’s selflessness and kind heart, they band together to help out their new friend. Non-verbal. Chicago Premiere.

Japan, 2019, 5 min. Directed by Satoshi Takahashi. A young girl must overcome her fear of the dark as she embarks on a journey to the bathroom in the middle of the night. Non-verbal.

USA, 2020, 6 min. Directed by Nathan Ward & Kian Ward. A short documentary about a talented young boy who rides a unicycle, taking him on an adventure through the streets of Cuba. In English. Chicago Premiere.

Ireland, 2019, 8 min. Directed by Lorraine Lordan. A scrappy kitty identifies as a dog until he meets a wise cat who helps him realize his true self. In English.

UK, 2018, 10 min. Directed by Carys Watford. Four friends use their imagination to leap into the unknown adventures of space. In English. Chicago Premiere.

The Little Bird and the Bees

Switzerland 2020, 4 min. Directed by Lena von Dohren. A bird and bees help leaves grow in the spring, but a fox nearby is on the hunt. Non-verbal. Chicago Premiere.

Germany, 2019, 7 min. Directed by Jerry Hoffman. A young boy tries to steal a mermaid doll while shopping with his family. When he is caught, his father has an unexpected reaction. U.S. Premiere.

Singapore, 2019, 6 min. Directed by Paul Ng. A security guard who dreams of becoming a dancer gets caught dancing on camera by one of his coworkers. Non-verbal. Chicago Premiere.

Netherlands, 2020, 10 min. Directed by Vincent Bal & Marlon Nowe. While stuck at home, young Max befriends and helps a shadow man who comes to life from one of his drawings. In Dutch with English subtitles. 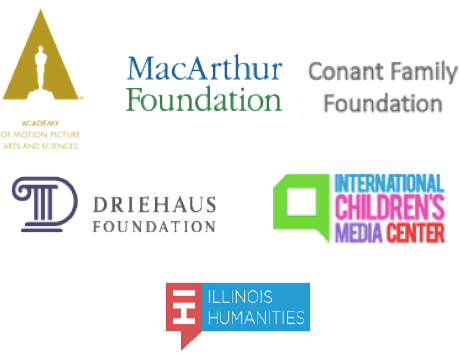